Holiday calendar and description of the festivals that take place throughout the year in Formentera. Traditional dances in costume and food festivals attract many tourists.

The inhabitants of Formentera live their holiday in a special way. The holidays are an occasion to remember and perpetuate rural traditions and keep their ancient customs intact, despite the economic transformation of the island from rural to tourist in recent decades. To keep alive the memory of Formentera populated by farmers and fishermen, they organize dances in costume, at the sound of drums, flutes and castanets, with which they want to convey, both to future generations and tourists, the ancient traditions of the island. The young women wear long skirts that reach the floor and exhibit jewelry and ornaments handed down from mother to daughter, while the men wear a red band on the waist and the traditional Phrygian cap. The holidays are the best time to admire the traditional costumes of sailors and farmers, adorned with neckerchiefs, scarves, shawls and also necklaces, earrings and trinkets.

On 25 July there is what is probably considered the most important festival of the island, Sant Jaume (St. James), the patron saint of the island. This important festival takes place in Sant Francesc, the capital of Formentera, where residents as well as tourists meet to take part in the celebrations. There are festivals and religious rites to commemorate the patron.

A few days ago, precisely on July 16, they celebrate the Virgen del Carmen (Our Lady of Mount Carmel), the patron saint of seafarers, and takes place in La Savina and Es Pujols. The ceremony begins in Es Pujols with a solemn Mass presided by the Bishop of Ibiza. Then the procession on the sea with the image of the Virgin which is placed on a boat and followed by many others, in fact for all those who want to take part in the maritime procession there is the possibility to follow it by their own boat. 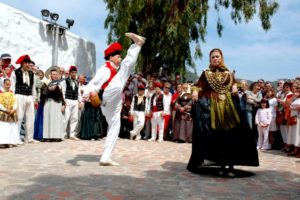 According to tradition, on that date, at about seven in the evening, a laurel wreath is thrown into the sea as gift and gratitude to the Virgin. Shortly after a group of young people dance on the fishermen’s boat the characteristic “ball pagés”, a traditional dance in which the man invites the woman to dance with a strong blow of castanets.
Returning to the mainland, the land procession begins and then the celebration goes on in the port of La Savina where there are events and concerts.

On June 24 in Formentera, as in the rest of Spain, there is the festival of Sant Joan (Saint John). In this wonderful night there are many events, concerts and fireworks in addition to the traditional bonfire, which, according to tradition, serves to drive out evil thoughts and memories of the whole year. Every year it is celebrated in El Pilar de la Mola and it is certainly one of the most important. The night of the eve, which is also the shortest of the year, all kinds of objects and materials, that, according to the legend, contain negativity, are gathered together. At the stroke of midnight, they were burned to erase all evil and bring luck until the next feast of Sant Joan.

On August 5, they celebrate the feast of the Mare de Deu de les Neus (Our Lady of the Snows), patron saint of Pitiuses Islands (Ibiza and Formentera). This feast has re-emerged strongly in recent years, includes cultural and gastronomic events and has the distinction of being celebrated every year in a different village.

On May 30, the feast of Sant Ferran is celebrated in the homonymous village of Sant Ferran. Those who are in Formentera in this period may attend religious rituals, festivals and visit the market in the church square.

On October 12, at El Pilar de la Mola, they celebrate the feast of Nuestra Senora del Pilar (Our Lady of the Pillar), the title under which Virgin Mary is venerated in Spain, considered the patron saint of Spain. In this day you can enjoy a variety of attractions like flea markets of traditional products and handicrafts, and moreover there are local dances. It traditionally coincides with the pig slaughter, a custom handed down through many generations in rural areas and that provides a good opportunity to taste the local products such as sobrassada, a raw cured sausage, and botifarra, a spicy pork sausage.

The last feast of the year is Sant Francesc which is celebrated on December 3, unique celebration of the winter, when the tourists are few and, therefore, it is quite intimate. This festival is fully dedicated to the saint from which the village also takes its name. 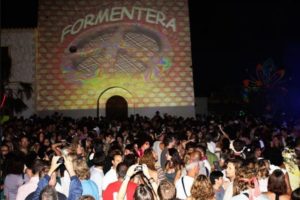 The funniest and most popular secular festival in Formentera is the Flower Power which is celebrated three times during the summer to remember the hippie past and involves tourists and inhabitants of the island. The first appointment is in the square of El Pilar de la Mola in late June, the following are in the square of Sant Ferran, decorated by flashy colors, and on the beach of Es Pujols.

Thousands of young people, with wigs and makeup, dressed in hippie clothes with necklaces and flowers, dance all night on the notes of funk and disco 60’s – 70’s – 80’s proposal by Dj Pharma, acclaimed star of the evening, in a joyful and carefree atmosphere.

A little curiosity: you can meet DJ Pharma every day in a white coat behind the counter of the pharmacy of Sant Ferran.