Platja de Llevant is the twin beach of the more famous Ses Illetes. 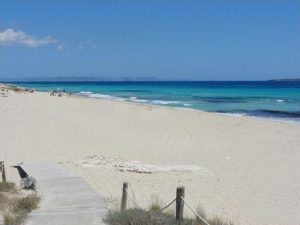 Platja de Llevant, is 3 km from the seaside town of Es Pujols and is located between Punta des Trucadors, which is the northernmost point of Formentera, and Playa des Canyers.

This beach, as you can guess by its name, is located in the eastern part of the Trucador peninsula, unlike the nearby Platja de Ses Illetes, which is instead located on the western side. Situated on a strip of land immediately after the natural park of Ses Salines, Platja de Llevant is a wide beach, it is about 1500 meters long and is worth a walk through.

It is a virgin beach with fine golden sand, crystal clear sea, which is generally slightly rougher than that of Ses Illetes, but as compensation shows the amazing variety of colors. 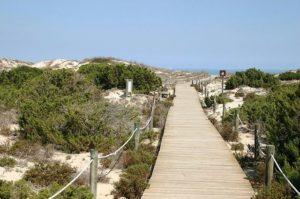 The rocky headlands are one of the main features of this beautiful place, which is also characterized by many dunes that surround the coast and form the landscape. Special wooden walkways providing easy access to the sea.

In the surrounding area there are kiosks and eateries. But despite this, the number of tourists is certainly lower than the nearby beach of Ses Illetes, so that those who come to this beach have a feeling of being in an unspoilt area and for this reason it is very popular and frequented by nudists.

On Platja de Llevant there is a bar very popular, the Tanga, that many people think that this is even the name of the beach.

It can be reached by both car and motorcycle, but you have to pay a toll to enter or otherwise on foot and in this case you go for a walk starting from Platja de Sa Roqueta through the comfortable wooden walkways.