Formentera, thanks to its Mediterranean climate, allows tourists to stay for most of the year.

Formentera belongs to the archipelago of Balearic Islands, composed of the main islands of Mallorca, Menorca and Ibiza and the smaller ones of Cabrera, Conejera, Dragonera, Es Vedrà, Espalmador, Espardell and Tagomago.

The climate we find in this area is typically Mediterranean. Characterized by mild temperatures and low rainfall, Formentera enjoys a privileged position within the Mediterranean Sea: it is in fact the southernmost of all the islands and the least rainy. It has happened several times that, over the course of an entire summer, it has never rained, thus making the springs scarce and thus forcing the need to resort to the desalination of sea water.

Weather forecasts in Formentera are very difficult to predict as the island is often subjected to winds that can quickly change the weather. The island can still be visited throughout the year without particular contraindications but there are times when you can fully enjoy the magic of this land.
To the classic questions: “Which is the best time to visit Formentera?” or “When to go to Formentera?” I usually answer “It depends on what kind of holiday you want!” However certainly within the period from April to October.
Below is a brief detail of the changing climate through all the seasons:

Winter: during the months from the end of December to the end of March the climate is quite mild. The sun often shines on the island, but alternates with a few days of rain with a consequent drop in temperatures. The wind blows frequently and can reach noteworthy speeds given the particular geographical conformation of the island (without promontories, apart from the plateau of La Mola, and therefore subject to numerous currents). It is certainly rare that it gets very cold but, sometimes, especially during the night, the minimum temperatures can be close to zero. Regarding sea water, the temperatures are not very inviting unless you are comfortable at 13-14 degrees.

Spring: from the end of March to the end of June, we note a succession of decidedly different climates in a short period of time. As the winter ends, the changing of the season is gradually felt. From late March to early May, Formentera begins to be heated. The temperatures will rise gradually and warming up in the sun of this period will already be very pleasant. You can visit the beaches to relax and have lunch in a restaurant overlooking the sea. The thermal condition of the water is not yet the best unless you go in late May (always remembering that long relaxing baths will not be on the agenda). The winds will be weaker, but it will be essential to bring a sweatshirt and a jacket with you, especially if you decide to rent a scooter to visit the island. The weeks of June are certainly the most suitable for a dream vacation!

Summer: from mid-June to mid-September Formentera reveals itself in all its beauty. Hot and sunny days, almost no rain… the sea water will be your favorite place! Certainly more crowded than the other months of the year, the island is in this period that shines in all its splendor. Clear skies, crystal clear sea and a relaxed atmosphere will make this island one of your places of the heart. It is known that once you visit Formentera you can no longer do without it! The days are also very long (up to almost 15 hours of light), perfect for fully enjoying the beauty of this island. Remember to use a good sunscreen because, during the summer, the sun’s rays are the most perpendicular compared to the rest of the year.

Autumn: from the end of September to the end of December, the heat accumulated by the earth and the sea gradually disappears. For this reason we will find pleasant temperatures that will fade over time. Depending on the climatic factors (now increasingly subject to changes) the climate of Formentera in this period could still be very pleasant in October but with the possibility of sudden changes as we approach November and December. It will be very difficult to take relaxing baths in the sea, but above all most of the activities will be closed during this season.

The island of the sun 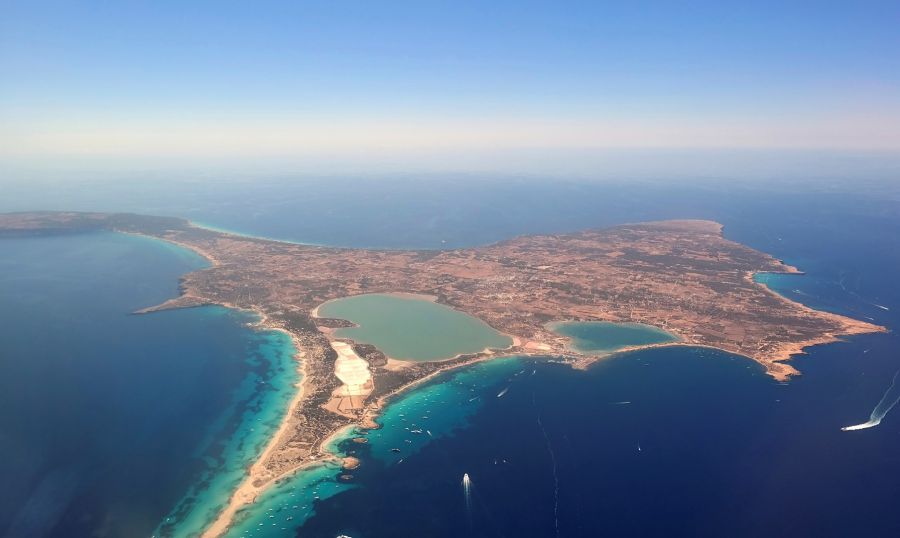 The island of the sun… Formentera. Mild and Mediterranean climate.

As mentioned in our title, Formentera, despite the changing seasons, certainly remains the island of the sun par excellence. It is estimated that this hot star is visible on the island for more than 300 days a year! In conclusion, we can say that the best time to visit Formentera is the one that goes from the beginning of April to the end of October, not only for the climate you will find but also for the services available (bars, restaurants, supermarkets). In any case, during your stay on the island, we advise you to watch the weather in Formentera in order to have the most up-to-date forecasts.

Being small in size and having a poor difference in altitude, the climatic characteristics differ slightly within the island. There are only slight variations in temperature and humidity between the coasts and the headlands of La Mola and Cap de Barbaria.

HOW TO GET TO FORMENTERA

Book using the promotional code ESTATE123 and save with our partners. The code is valid for EVERYONE. You can take advantage of discounts even if we could not provide the right accommodation for you.