Es Caló is a small village at the foot of Roman Path which leads to La Mola. Its beach has the distinction of being the only one of Formentera to have a rocky bottom. 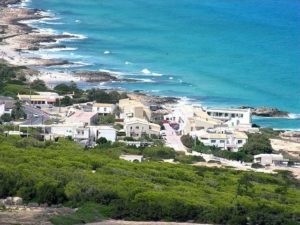 Es Caló de Sant Agustí, one of the most picturesque areas of the island of Formentera, is a pretty little fishing port capable of accommodating traditional local fishing boats, and it was one of the first villages dedicated to tourism. It was an active commercial port and an important port of call for maintenance of fishing boats until the first half of the twentieth century. The quote de Sant August binds the port to a monastery of the XIV century, of whom there are no more traces.

In the area of ​​Es Caló there are also two beautiful coves of sand and rock that still retain a wild appearance, Es Caló de Sant Agustì and Ses Platgetes, ideal for those wishing to relax and soak up the sun, but also for lovers of diving, in fact it is common to see many divers in these clear waters.

A well-known and picturesque uphill path begins from Es Caló towards El Pilar de la Mola, very important on a historical level, called Camì Romà, an old Roman road paved by the Romans at the time of their domination, around the thirteenth century. The path, well-maintained, within pine forests and with superb views of the coast, leads up to a very high point, Es Mirador, from where you can admire a magnificent panorama of Formentera in all its wild splendor.

A must see for all those who want a romantic stroll at sunset, but also for those who want to go fishing off a boat or take a trip and admire the cliffs perched over the sea, the caves in the rocks and the beautiful seabed that will please all divers.

The atmosphere that reigns in this small village, surrounded by a wooded strip, is impressive, not to mention the fact that here are some of the best restaurants in Formentera, as Can Rafalet and Pascual, where you can enjoy delicious fish-based specialtiesand typical dishes of Formentera.