Formentera, the last paradise of the Mediterranean.

The island of Formentera belongs to the Balearic Islands, which also consists of the islands of Mallorca, Menorca and Ibiza. With its extension of only 83 square kilometres, it is the smallest of all and is located south of Ibiza, just 2 nautical miles away (about 3 km). Formentera has no airport and is accessible only by the sea. To get to Formentera you will have to take a flight to Ibiza, go to the port (not far from the airport) and take a ferry that will get you to Formentera in just 30 minutes.

The place where the port of Formentera is located is called La Savina and is one of the most frequented towns, not only because it is a destination for arrivals and departures, but also for its sought after bars and the particular lagoon that turns pink at sunset. 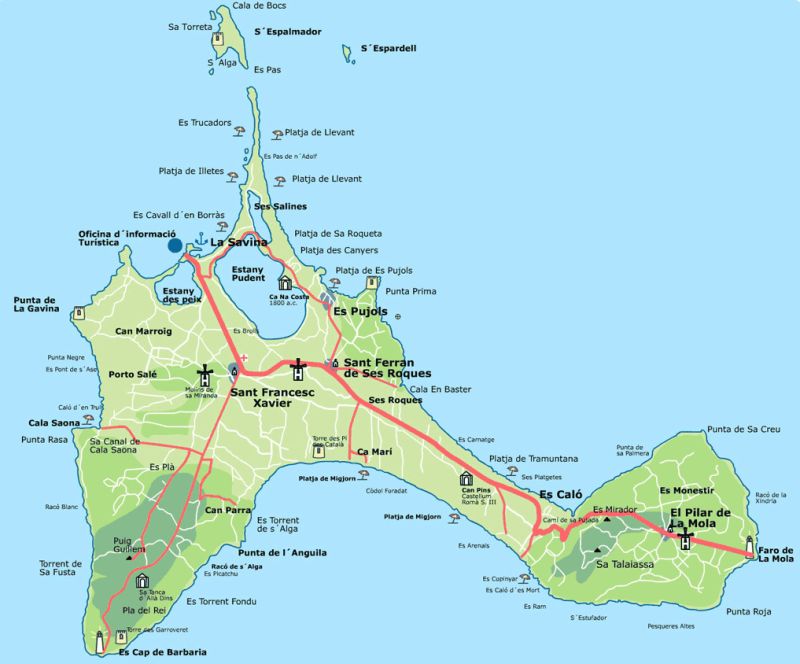 Despite its small size, Formentera enjoys a large stretch of coast (69 km) and the presence of numerous beaches, small coves and enchanted places will soon make you forget stress and everyday problems.

Thanks to its mainly flat nature, we recommend renting a bicycle that will allow you to get even more in tune with the genius loci of the place. Many are in fact the green routes to go: you will be completely enveloped by the scent of pine trees, junipers and numerous aromatic plants that grow spontaneously in this magical place. It is also easy to come across numerous species of birds such as flamingos and gulls, or other animals such as lizards (the island’s symbol) and hedgehogs. Flora and fauna are preserved by the Island Council of Formentera.

The island still retains a rural aspect, especially in the less traveled areas: in fact the typical buildings of the place, called fincas, survive. They are houses built with island stones, with very thick walls, able to shelter from the winter cold and summer heat. It is not unusual to see, adjacent to these houses, wells and external ovens which were used for the daily sustenance of the families of the time.

Located at the two ends of the island and at a higher altitude are the plateaus with their lighthouses of Cap de Barbaria and La Mola. The first is located in the south-west, after a few kilometers of uncontaminated nature and the other is located in the south-east, about 200 meters above sea level, at the end of the village of El Pilar de la Mola. To reach them you need to rent a scooter or a car.

Inside the island there is a main road that connects the two ends. 19 km long, it starts from the port of La Savina and reaches the La Mola lighthouse. From this road branch off numerous secondary roads that lead to the various villages and beaches of Formentera. To orient yourself, you should know that every place along this stretch of road is identified by the kilometer it belongs to (calculated based on the distance from the port of La Savina).

The island of Formentera stands out for its outstanding natural beauty, but surely what makes it famous, wherever, is the clarity of its waters. The secret of the long beaches of Formentera and its crystal clear sea lies in the Posidonia oceanica meadows that surround the island, an alga that has multiple functions including giving oxygen and transparency to water and making it possible to deposit sand along the coast. For this reason it was declared a World Heritage Site by UNESCO in 1999.

The population living in Formentera is about 12.000 inhabitants. Distributed between the various villages, from the capital Sant Francesc Xavier to the other nucleuses like Sant Ferran, La Savina (seat of the port), Es Pujols (main tourist resort where we recommend you to rent an apartment) and El Pilar de la Mola, the number grows considerably during the summer season. A holiday destination par excellence, especially for European citizens, this small island welcomes around 300,000 tourists each year. Thanks to the crystal clear sea and its sandy beaches, Formentera is one of the most loved places in the Mediterranean.

It is in fact the favorite destination of travelers who want to spend a holiday in contact with nature and those who visit it for the first time are literally bewitched. Famous are its sunsets that give colors and emotions difficult to find elsewhere; its white beaches and gently sloping seabed allow anyone to relax and indulge in the wildest spirit that lingers in this place. In fact, Formentera was a hippy destination during the mid-1960s.

During the last few years what has allowed to make the island even more known has been the presence of numerous VIPs like Lionel Messi, Cristiano Ronaldo, Cara Delevingne, Noel Gallagher, Usain Bolt, Giorgio Armani, Nico Rosberg, Kate Moss and many others.

HOW TO GET FORMENTERA